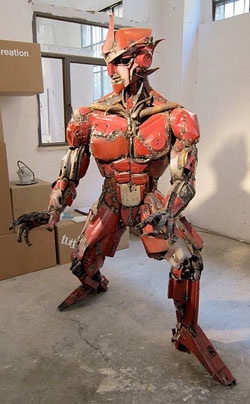 This robot might not be able to transform into a car, but it definitely was made out of one.

Nikola Nikolov is an artist that loves to create objects from random materials. He's made chairs from broken dishes and sculpted a dog out of broken furniture. Now, he's created a robot out of a car. Quite the jump.

As you can see, the robot cannot be described in a way other that "F*CKING AWESOME!!" Nikolov tore apart his and the wife's first car, a Lady Samara Diva, and sculpted it into something I would never want angry at me. It's 6 feet 6 inches tall and appears to stand on it's own. I want a fleet of them on my lawn

It's just too bad that Nikolov's robot is actually more of a sculpture than a robot, but that shouldn't diminish his accomplishment. I can barely sculpt a stick figure out of clay, but he managed to make a robot out of a car. I repeat, he made that out of a car. This car, in fact: 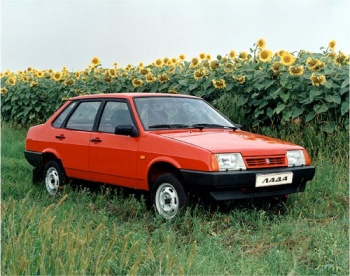 Notice any similarities? Nikolov's other less robot-like works can be found on his website.

Escape to the Movies: Real Steel MovieBob 148 Comments
Comments on