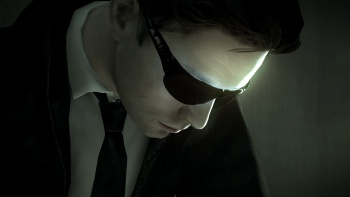 One of the reasons I enjoyed Heavy Rain so much was its unique control scheme, which I felt created a more organic connection between the player and the characters by using the thumbsticks to mimic real-life movements. As involving as it was, though, pressing X can only get so close to feeling like ducking under a fence. I got the chance to try the new version of the game that works with Sony's motion-sensing Move controllers and if you've never played Heavy Rain before, now may be the perfect time.

The Move and Nav controllers are shaped very much like the Wii Remote and Nunchuk, but aren't linked together by a wire, which helps you forget that they're controllers and not extensions of your hands. You walk by moving the Nav nub, but just about everything else is done by manipulating the Move in 3d space. Occasionally you'll have to hit the great big Move button in the middle of the controller, but for the most part, you're simply waving the wand around in ways that make sense given the context of your actions. To knock on a door, for example, you gesture forward, towards your tv. To grab something out of your pocket, you gesture down.

I played a tutorial level that was added specifically to help players learn how to work with the new controls, and then played one of the early fight scenes. There was definitely a learning curve involved in matching the on-screen icons to motions, but I eventually got the hang of it. The original version of Heavy Rain had three difficulty settings, the new version has only two: one designed for hardcore players, and one designed for the more casual crowd. The Move and Nav are certainly more accessible than a PS3 controller, but will that be enough to woo nongamers to give Heavy Rain a try? That I'm not so sure about.

At times, using the Move felt artificial, but at others, like during the fight, it felt completely natural and intuitive. I have many gamer friends who struggled with Heavy Rain due to their unfamiliarity with the PS3 controller, so I'm happy that the Move control option is available to them. The one regret I have is that Sony's 3D glasses weren't also integrated into the new control scheme. How amazing would it be to actually put on a pair of sunglasses and use ARI's interface - or an approximation, anyway? Ah, well. Perhaps in the next revision.

If you've already finished Heavy Rain, then the new control scheme is little more than an intriguing curiosity, but if you never quite got around to it when it first came out, this should rekindle your interest.