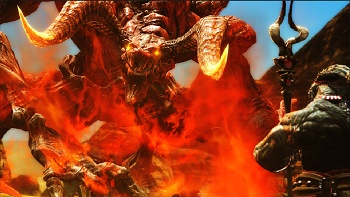 Square is trying to reinvent its flagship MMOG, but the gameplay pales in comparison to modern titles.

When Final Fantasy XI came out in 2002, we were in a world without WoW and the idea of a MMOG shared between consoles and PCs was novel. FFXI was a moderate success, but I'm sure that the design team for the sequel would love to crack into the subscription numbers that would make the game a cash cow. Unfortunately, the FFXIV that I played at the Square-Enix booth at E3 seemed to be very pretty without any visceral combat or compelling gameplay.

First off, FFXIV takes place in a different world and shares no continuity with previous FF titles. Still, it is weirdly familiar. There are cat people, but they are called Miqo'te instead of Mithra. I'm told that there will be Chocobos and even Phoenix Down, but I wasn't shown any in the portion that I played.

I was put in front of a PC station that had 3 monitors equipped with 3D technology. I threw on the provided Nvidia glasses and was blown away by the visuals. FFXIV is beautiful, with a richly designed art style. My demo character was a female Miqo'te (no, I didn't pick her but I've been one to turn down a ... cat) and she was walking through the port city of Limsa Lominsa. The whole town has a very pirate or seafaring feel, but with huge open spaces and large sculpted buildings out of a Yes album cover. Think of Elven Steampunk and you're halfway there. In 3D, it looks even better.

FFXIV eschews the whole class decision thing, and allows you to change classes on the fly by equipping different weapons or items. Even crafting is in that equation, so when you equip, say, a spoon, you turn into a "Culinarian." (Why couldn't they just use cook?) Leveling is also different in FFXIV, based on leveling skills as opposed to gaining XP. Because of this, you can level up through the whole game by crafting without ever fighting a monster.

The actual game wasn't that fun, though. After exploring Limsa Lominsa, we switched characters to show off the Thaumaturge class, which is the debuffer magical class. My Thaumaturge was spawned in a green open world with rolling hills and a big crystal. This crystal is where we get our quest, which tells us to grab 5 pages of a book and summon and defeat the beast that we can summon from those pages. I was able to select the difficulty of the quest, from Solo to Band to the most difficult for large groups and raids. I like that this feature is in the game, but I feel that it should decide how easy or hard the enemies are based on if I'm in a group or not. Selecting the difficulty for each quest will get tedious and it definitely broke any kind of immersion that the beautiful 3D graphics had achieved.

The book pages were harvested from shiny nodes, even more conspicuous than the famous WoW sparkles. The problem was that my quest was instanced, so that I could see other player characters going up to random places and doing stuff without ever seeing the node or what they were fighting. After I finished the quest, the big crystal respawned and I was able to immediately turn in the quest and receive the reward.

Obviously, FFXIV is still in development, but I found its controls to be terribly unresponsive. And even though having quests automatically turn in will speed up leveling, I think that it will also severely cut down on the amount of exploration in the game. It's a small design decision, but one that will have serious implications over the course of the whole MMOG experience.

Also, why the hell can't my character jump? Tomes have been written about how jumping in an MMOG gives the player a sense of agency. Disallowing jumping does quite the opposite. I believe that it was a mistake in FFXI and XIV is making the same one.

Perhaps it is possible for producer Hiromichi Tanaka to iron out these details before the game launches this fall for the PC and the PlayStation 3.

But don't count your chocobos before they hatch.