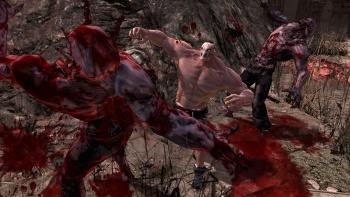 The bloodiest game of its time is back, and, well, Splatterhouse is bloodier than ever.

When Splatterhouse was first released in American arcades in 1989, it was one of the first videogame titles to receive backlash for its over-the-top blood, gore, and horror movie aesthetic. That made the console release on the TurboGrafx-16 heavily censored, and sparked a debate on videogame violence that still rages today. Namco's decision to redesign the game for AAA release on today's consoles might mean that videogame makers no longer feel the need to apologize for "adult" content. Or it just may mean that they are batshit crazy.

The story has remained largely unchanged from the first game, although there are some departures. A guy named Rick and his girlfriend Jennifer are attacked by creatures coming from the mansion of their teacher, Dr. West. Jennifer is taken and Rick mortally wounded. A white mask is in Rick's reach, and a voice beckons him to put it on. Rick does so, and is transformed into a bulky version of himself. The mask speaks to Rick and instructs him that he must move through the mansion (the titular Splatterhouse) to save his girlfriend. Basically it's Rocky Horror Picture Show meets The Mask.

The plot isn't that important, because the game is all about style. Rick brawls his way through waves of ever more disgusting creatures. Each blow sends splatters of blood across the screen. The interior of the mansion, all twisted and filled with demon-spawning goo, is drawn in comic-book style, not quite cell-shaded, but close. The comic-ness is accentuated when Rick builds up enough power and enters Rage mode. Everything goes black and white, except for the blood, and Rick's attacks pack a whole lot more punch.

Gore abounds in almost every facet of the game. You can rip off the arms of enemies and then beat them with it as a melee weapon. The same with heads or skulls. The finishing move for one boss (a short QTE that plays once its life reaches zero) involves ripping off its devil horns in a spray of blood. You can then throw those horns at the next enemy. Puzzles are just as gory. One room had me picking up enemies and impaling them on spikes. Once I had impaled four bodies in such a way, the door opened and Rick was able to continue his journey into the Splatterhouse.

The brawling combat of Splatterhouse is fun, and the horror/comic book aesthetic worked for me. I also kind of dug how Namco didn't pull punches in the marketing for this game. It is what it is, made to be enjoyed by adult gamers. It contrasted greatly with the kid-friendly family fare being schilled at more prominent booths. Playing Splatterhouse on the E3 show floor next to the Harvest Moon display was an odd moment for me, but one that I will cherish as a signature moment of this year's show.

Splatterhouse is due out this fall on the Xbox 360 and the PlayStation 3. 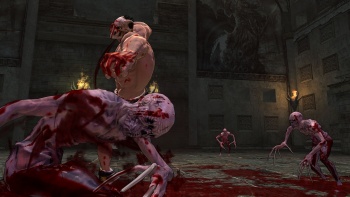