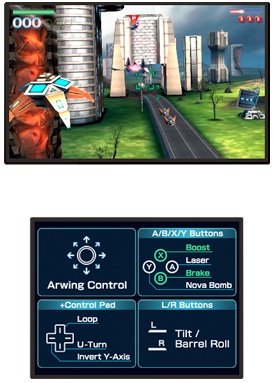 Whether or not it's just a passing fad, 3D technology is the current "will sell millions" bullet point for producers of entertainment and technology alike. Nintendo nimbly jumps on that bandwagon with its latest revision to the DS handheld, the "3DS." See what they did there? Clever.

Nintendo leapfrogs the competition in this area, however, by allowing users to take advantage of the 3D visual effects without the use of special glasses. Sony is publicly downplaying the impact of this advancement, while most likely hurriedly dumping millions of prototype 3D PSPs (with glasses) into the sea.

In addition to tweaking its rivals and allowing Nintendo to capture even more headlines, the advent of the 3DS has allowed them to establish yet another platform through which to sell you games you've already played. Specifically, Starfox 64 in 3D!

Those familiar with Starfox 64 will recall that it's a flight shooter in which you pilot the wily fox and his nimble craft over, around and through obstacles while blasting enemies and collecting powerups. It's the kind of game that was mind-blowing a couple of decades ago, and is still fun in short bursts, on handhelds devices, or while taking breaks from more time-consuming games.

What's remarkable about Starfox 64 3D is how well it holds up, particularly with the additional wow factor of the "3D". The game's clever art style and rock-solid control scheme make it just as much fun to play now as it was when the N64 was on store shelves, and the added dimension makes each narrow escape and hair's breadth maneuver feel even that much more intense.

Playing Starfox 64 3D at E3, I genuinely began to forget that I was standing in a very crowded booth in front of a very pretty sales lady. My PR handler actually had to peel me away form the game to drag me to the next. I could see losing days to it, which, for a handheld shooter, is about all that you could ask.

We don't know yet when the game will be released, but I'd expect to see it later this year along with a slew of other legacy games updated for 3D. Check back with us regularly for more details.

You can also read more about the amazing technological marvel that is the 3DS in Steve Butts' preview of Pilotwings and Greg Tito's full write-up of the device.