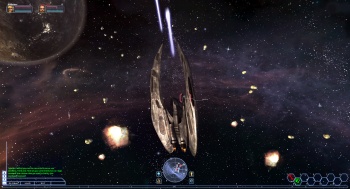 Big Point is trying to leverage the BSG fanbase into a free-to-play space combat MMOG.

Big Point is the biggest MMOG creator that you've probably never heard of. They make and publish games in their own development studio, including Puzzle Pirates, but they also make games for other companies such as MTV Europe and USA Networks. If you've ever played a game at SyFy.com, then you've played a Big Point game.

When General Electric and NBC bought out Big Point several years ago, it offered its backlog of content to the German browser MMOG company to see if there was any property that it might want to exploit a game. Many of the devs at Big Point were big fans of the rebooted Battlestar Galactica and immediately jumped on the chance to make a game with that IP. After it was announced at GDC, many were skeptical that a browser-based MMOG would do the rich BSG universe any justice. P.R. man Erik Reynolds urged his client to show what they had built so far to alleviate any qualms of low quality graphics or kiddie-centric gameplay.

The Big Point booth at E3 wasn't huge or flashy, but it had a purpose. The trailer for the BSG game was running on TVs in the background but I was shown the game at a PC station. Reynolds was quick to point out important information. The MMOG is loosely set during Season 2 of the show, when the tensions between the Cylons and the Colonials were at their peak. The show creators cooperated with development; Ron Moore himself approved the trailer before it went live. You can choose to play as either a human in the Colonial Fleet or a Cylon. It's not clear if you play as a "skinjob", but you do inhabit a Cylon Raider chasing after Vipers piloted by the likes of Starbuck and Apollo. The Raider looks a lot like Scar.

The tech demo that I was shown was a very early alpha. A lot of the UI art was placeholders, but it still looked on par with today's MMOGs. The space graphics and the ships were all rendered beautifully; it was easy to forget that the game was running in Google's Chrome browser. Reynolds assured me that BSG Online will run in IE, Firefox or any other browser after downloading and installing the Unity plugin. Chrome just has the advantage of running the game out of the box, so to speak.

It's free to play; you don't have to pay a cent to log on. All of the items that you can buy are largely cosmetic, but you can purchase weapons and ship upgrades. "You will never be able to buy your way to eliteness," Reynolds made sure to state. "[Big Point] knows how to balance this type of gameplay because they've been doing it for so long."

BSG Online is focused on space combat. The demo showed a Cylon Raider raiding a Colonial system and engaging the enemy Vipers with auto-attack cannons and missiles fired on a cooldown. Flight controls were handled with WASD but you can set up auto-follows and guidance systems. You can bring up a paper doll of your ship and equip different weapons or shields. The game looked and felt a lot like EVE Online.

There were not a lot of details given and I was left with a lot of questions. How will this game channel the paranoia of Cylon infiltrators that was a big theme in the early seasons of the show? Will the space combat be enough to effectively utilize the license? Reynolds mentioned that acquiring resources will be very important. Mining and group resource gathering were promised, plopping down a harvester ship on an asteroid and defending it from attack was the example given. You will be able to group in guilds (Squadrons? Flotillas?) to take down bigger targets such as enemy convoys. There will be portions of that your avatar will be able to walk around on ships or planets but Reynolds was not ready to talk about that experience yet. Will you be able to equip your avatar with different items to further customize your character? I don't know, but I don't think that the developers don't know either. Yet.

When I asked whether BSG Online will fall under the same curse as Star Trek Online did (good MMOG mechanics but didn't "feel" like Star Trek), it did seem like they have the heart of the series in mind. "I think that the feeling that we're really touching on is that sense of constantly being hunted or constantly hunting, which is what made Season 2[of BSG] freaking phenomenal," Reynolds said. "It's not going to be a disconnect like 'Hey, I'm shooting and I'm a Cylon.' That's not very fun."

Big Point is aiming for Battlestar Galactica Online to be released by the end of the year. It will only be available at SyFy.com for the first 30 days, so it will be a trial by fire for the game as it runs through the gauntlet of the hardcore fanbase for the Battlestar Galactica series. Let's hope that it comes out with its guns frakking blazing. 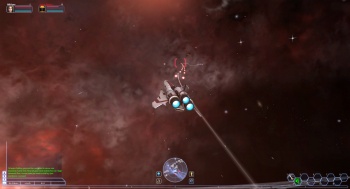