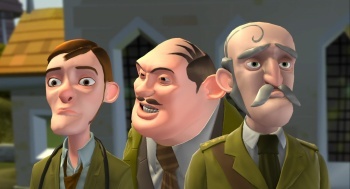 In Blue Toad Murder Files, players investigate the skullduggery, shenanigans and other unpleasant goings-on in Little Riddle, a scenic, sleepy English village where murder is in the air. The game can be played solo but the real fun comes when other detectives are added to the mix, with up to four players helping - or hindering - their fellow investigators.

The original six episodes of the Blue Toad Murder Files have now been collected into a "virtual box set," allowing players to experience all the joys of Little Riddle from start to finish. Each episode can be played alone but the story, characters and running gags carry over from one to the next, so playing from start to finish is a big part of appreciating the game's many jokes and subtleties.

Blue Toad Murder Files: The Mysteries of Little Riddle is available from the PlayStation Store for $26.99 and to celebrate the launch, the stand-alone version of Episode 1 is on sale for $1.49 until July 20. Gamers who buy the first episode and then decide to grab the rest of the bundle will be able to take advantage of an "upgrade price" of $25.49. More information about the game is available at bluetoadmurderfiles.co.uk or better yet, check out Susan Arendt's review and video right here at The Escapist.