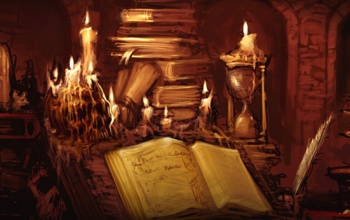 Have you ever wanted to visit the offices of Blizzard Entertainment to see where they make some of the most beloved computer games of all time? If you think you can write some great fanfiction, you just might have a shot.

I realize that I'm a lucky man. I've gotten to visit Blizzard's development studio not once but twice, and I can tell you that it is pretty much nerd Paradise on Earth. Even if you don't like Blizzard's games, the place just has so much awesome behind closed doors that I can't imagine any gamer wouldn't want to visit.

Well, now you have your chance. Blizzard is holding a reprise of its 2009 fiction contest this year, asking contestants to submit a short story (2,500 - 7,500 words) set in the Diablo, Warcraft, or StarCraft universes.

One lucky winner will be flown to Irvine, California, where they'll get a tour of the Blizzard offices and meet the people who write the actual fiction that goes into the games - as well as get their choice of a Diablo Barbarian diorama or a replica of Frostmourne, the Lich King's blade.

The rules and further details are on the Blizzard site, as are last year's winners. Either way, it's a cool offer - and people said that your fanfiction wouldn't ever get you anywhere!

As for the Blizzard judges? Well, those who are about to read a lot of really crappy fanfiction? We salute you.