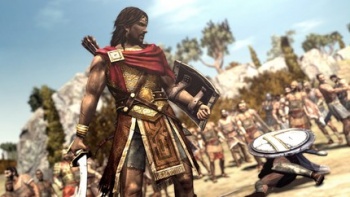 Every gamer is familiar with the tale of the Trojan War, and the epic confrontation of Achilles and Hector at the gates of Troy. Yet few have ever read the source material, the epic poem known as The Iliad. And that's a shame. For sheer blood-drenched visceral action, few narratives can match Homer's poetry:

"Achilles' spear wounded Deucalion in the fore-arm where the sinews of the elbow are united, whereon he waited Achilles' onset with his arm hanging down and death staring him in the face. Achilles cut his head off with a blow from his sword and flung it, helmet and all, away from him, and the marrow came oozing out of Deucalion's backbone as he lay."

If the ESRB was around in 700 B.C., they'd have had to rate The Iliad M for Mature. It only took 2710 years, but The Iliad is finally coming to consoles this fall, in the form of a new installment in the Dynasty Warriors franchise by Tecmo Koei America. Called Warriors: Legends of Troy, it seeks to bring tactical action gameplay to North American consumers in a packaging that's a bit more Western than the traditional "Romance of the Three Kingdoms" Chinese warfare of the previous games.

As a fan of The Iliad, I was quite intrigued at the possibilities inherent in combining the epic story of the Greek myth and the epic slaughter of the Dynasty Warriors games. But I was anxious as well: All too often, Greek myth is ruined by modern interlopers who think they can improve on tales of adventure and mayhem that were written in an era when people actually put on armor and killed foes for fun.

I got hands-on at E3 to find out the truth about Troy, and grilled senior gameplay designer Mike Bond in the process. My initial concerns were essentially narrative: Was this going to be a genuine adaption of the epic, or an action game related to The Iliad to the same extent Dante's Inferno was related to Dante's Inferno (Which is to say, not related at all)?

The answers I got made warmed my Hoplite-armored heart. Bond claimed the game was a detailed adaption of the entire mythological cycle of the Trojan War, covering the entire 10 year history of the epic confrontation, starting with the abduction of Helen by Prince Paris and ending with the destruction of Troy by the rampaging Greeks. He said that the game was designed to be true to Homer's Iliad as well as the other epic poems from the era, and even included lesser-known characters like the Amazon princess Panthesilea as playable characters.

In telling the myth straight, Tecmo Koei is doing the right thing. The beauty of Greek mythology is that it's already awesome. Achilles is not a protagonist you need to adapt to make "darker and edgier":

"Achilles drew his keen blade, and struck Lycaon by the collar-bone on his neck; he plunged his two-edged sword into him to the very hilt, whereon Lycaon lay at full length on the ground, with the dark blood welling from him till the earth was soaked. Then Achilles caught him by the foot and flung him into the river to go down stream, saying, 'Lie there among the fishes, who will lick the blood from your wound and gloat over it.'"

Given that I'm still bitter at Clash of the Titans for distorting the facts over who actually tamed the Pegasus (it was Bellerophon, not Perseus, and they fought a Chimera, not a Medusa), I'd probably be excited just hearing that the game was going to be true to the myths, but the gameplay is actually good, too.

The E3 demo let me get hands-on as Achilles, ostensibly the most powerful warrior on either side during the war. If at this point you're asking "how much fun can it be to play a hero who can't be hurt except in his left heel?", it's worth noting that in The Iliad, Achilles is not invincible all over except for his left heel - that's a later accretion to the story that got tacked on; in Homer's version, Achilles has magical armor, not invulnerable skin. That's the version Tecmo Koei has gone with, and the result is an armored bad-ass who wields sword and spear to deal death.

The actual death-dealing was engaging and accessible, as it should be. I've always found the most frustrating aspect of third-person fighting games to be circling and strafing against targets, but Legends of Troy offers a left-trigger "lock on" that makes it simple to maneuver against enemy champions. Combat was visceral and brutal, with blood and guts flying everywhere, and the entire aesthetic perfectly captured the look and feel of 300 or Troy. The enemy AI actually cowers in fear and flees when you start to win, which I found delightful, and very representative of the myth. Finishing blows were as nasty as the ones in The Iliad itself.

While playing as Achilles, I found I could also trigger a special "wrath" mode, sending the game visuals into dark and brooding overtones while I became a wrathful killing machine. It was almost as if they were trying to simulate this:

"So furiously did Achilles rage, wielding his spear as though he were a god, and giving chase to those whom he would slay, that the dark earth ran with blood. Like the farmer who yokes broad-browed oxen that they may tread barley in a threshing-floor-and it is soon bruised small under the feet of the lowing cattle-even so did the horses of Achilles trample on the shields and bodies of the slain. The axle underneath and the railing that ran round the chariot were bespattered with clots of blood thrown up by the horses' hoofs, and from the tires of the wheels; but Achilles pressed on to win still further glory, and his hands were bedrabbled with gore."

In short, the game demo made me feel like Achilles, prince of war; rather than Alex, potato of couches. I call that a good game demo. I'm looking forward to seeing Warriors: Legends of Troy when it releases this fall on Xbox 360 and PS3.