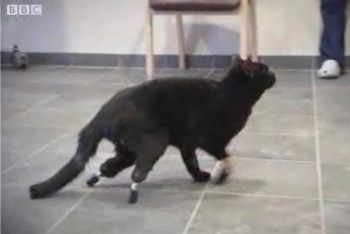 A veterinary surgeon in the U.K. has brought human civilization one step closer to ruin by attaching two bionic limbs to a cat that was injured in a farming accident.

Oscar the cat had a bit of a bad day earlier this year: While taking a pleasant nap in a farmer's field in Jersey, he was clobbered by a combine harvester that took off his back legs. His owner managed to get him to a vet, where he was stabilized and patched up, but instead of fitting him for one of those little ass-carts with the tiny wheels, the local vet suggested his owners contact Noel Fitzpatrick, a Surrey veterinary surgeon who specializes in prosthetics.

Fast-forward through phone conversations, pictures and x-rays, and Oscar was flown from Jersey to the U.K., where he was measured up for his new bionic legs. Fitzpatrick implanted pegs called "intraosseous transcutaneous amputation prosthetics," or Itaps, into Oscar's stumps that left the cat with metal studs where his lower legs used to be.

"The real revolution with Oscar is [that] we have put a piece of metal and a flange into which skin grows into an extremely tight bone," Fitzpatrick told the BBC. "We have managed to get the bone and skin to grow into the implant and we have developed an 'exoprosthesis' that allows this implant to work as a see-saw on the bottom of an animal's limbs to give him effectively normal gait."

The "exoprothesis" is actually two prototype feet that attach to the pegs to give Oscar a more natural degree of "wobble" when he walks. The attachments were designed and built by engineers at the University of Salford, although Fitzpatrick had to make some final adjustments with the ultimate handyman tool. "The key to all great technology is tape," he explained. "Oscar is black and I'm not going to put brown feet on a black cat, so I'm going to put some black tape on."

The final result was pretty spectacular: A few minutes after the sedative wore off, Oscar was up and moving around like a champ, even climbing over obstacles Fitzpatrick had put out to limit the cat's range.

You might be wondering why so much time and effort was sunk into creating and attaching replacement legs for a cat that was too stupid to get out of the way of a giant piece of farm machinery. The truth is that, awesome though cats may be (in a vicious, predatory, "they're-not-cute-they're-dangerous-and-violent" way), the real motivation is hope that the technology can be put to use in people.

Itaps was originally designed for amputation patients with "stump sockets," explained University College London Professor Gordon Blunn, who led the team that developed the technology. "This means they fix their artificial limb with a sock, which fits over the stump. In a lot of cases this is successful, but you [often] get rubbing and pressure sores," he said.

Blunn said Oscar's success showed off the technology's potential. "The intriguing thing with Oscar was that he had two implants - one in each back leg, and in quite an unusual site," he continued. "Noel has some brilliant ideas, and we're continuing to work closely with him to develop new technologies."

What's next for Oscar? Perhaps bionic claws that will allow him to destroy your furniture, maul your dog and kill every bird on the block, better, stronger and faster than ever before. After all, we have the technology; we have the capability.