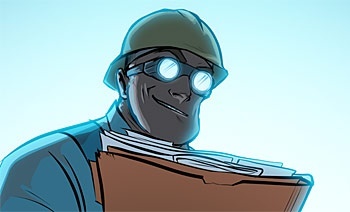 At long last, the Team Fortress 2 Engineer is getting some love from Valve, including an epic, generation-spanning comic and the debut of the fabled Golden Wrench.

The Engineer is a humble man, eschewing flash and glory for effectiveness and results. His quiet reliability leaves him often overlooked amidst the chaos and carnage of the TF2 battlefield, yet without the rock-solid foundation provided by his various creations, many a team would collapse in disarray. It's nice to see, then, that the hard-hatted hero is finally starting to get the respect he deserves.

Expanding yet further upon the Team Fortress 2 lore is Loose Cannon, a lengthy comic telling the tale of not just the current Engineer but also his forebears, going all the way back to 1890 - which is apparently when the long-running conflict between the Red and the Blue first began. The game's deep connection with the mysterious land of Australia, a nation of "lager-pickled idiots" that just happens to be set atop the world's only "transformative" element, is also explored to hilarious effect.

From a more practical perspective, the Golden Wrench, which was discovered in the game's files following the July 1 update, has also apparently gone live. The Golden Wrench appears to be identical to its standard drop-forged steel counterpart, except that enemies killed with it turn into golden statues. Only five wrenches were supposed to drop but a bug in the drop system resulted in more being set loose, according to the Team Fortress Wiki; specific requirements to earn the Golden Wrench aren't currently known but the TF2 Backpack Examiner says only 16 players currently possess it.

The odds are good that there's more to come for gaming's foremost practical problem solver, so keep an eye on the Team Fortress blog for updates!

Thanks to Sir Kemper for the tip.