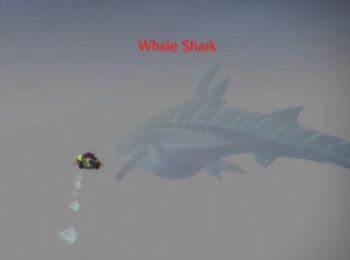 The Whale Shark will murder you. Seriously.

With Cataclysm, Blizzard has done the unthinkable: It has created an underwater level in a game that not only isn't awful, but is actually pretty fun.

So, in case you missed it, last week Blizzard officially kicked off the beta for World of Warcraft: Cataclysm, and brought a few of us along for the ride. Later on, Features Editor Greg Tito will be taking a look at the new Goblin race, and Managing Editor Steve Butts will be rolling a Worgen - and I, as the office's resident WoWhead, will be looking at the new max-level stuff.

One of the first new places I checked out was one of the two new starting zones for level 80 characters, the sunken city of Vashj'ir. Now, with a few exceptions here and there, it's a well-known fact that underwater levels in videogames tend to suck, and suck hard. In fact, most of the underwater quests in WoW itself were pretty awful - with that in mind, I was prepared for Vashj'ir to be one of the worst experiences I've ever had in all of Azeroth.

As it turns out, it's not. Actually, it's kind of awesome.

The reason why many underwater zones tend to suck in games is twofold: First, your movement is restricted - sure, you can theoretically move anywhere in all three dimensions, but you're so much slower compared to how you move on land. Second, there's the pesky problem of often needing to breathe. It's no fun to be chained to an area that you have to constantly return to in order to survive - and I'm sure we all have horrible memories of the Sonic the Hedgehog drowning music. 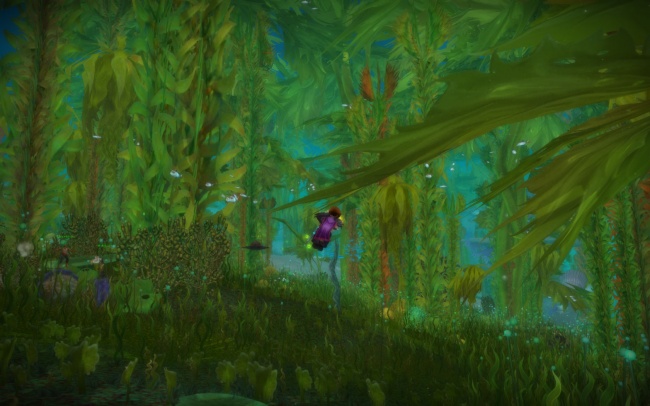 Vashj'ir does away with both of those right off the bat. After a (completely awesome) introduction to the zone which sees you abandoning ship, you just have to do one short little quest, and then get a buff called "Sea Legs." The buff increases your speed underwater by a good amount and gives you infinite breath, essentially just making it like the world above - only with free swimming, where you can be running along the ground and then just jump off and start swimming around.

The zone is gorgeous from what I've seen of it - the Kelp Forest seen here is wonderful to look at - though the full-3D exploration can make it harder to orient oneself in finding quests at first. Vashj'ir uses the phasing technology introduced in Wrath to great effect as you battle evil naga and help set up underwater outposts. Of particular note is a quest chain that has you searching for an underwater mount: Nagas are too hard to break (and sentient albeit evil, so there's a bit of an ethical dilemma there), and sea turtles are too slow. What's next? Who knows, I haven't gotten that far yet.

There's also the enemy you see above: The Whale Shark. He swims along the edge to the deeper ocean, has 8 million hit points, and has an absolutely mammoth hit-box. If you right-click him even anywhere in his remote vicinity (as in, much farther than the screenshot above), you will attack him. He will come find you, slowly but surely. And he will hit you for 200,000 damage - and you will die.

So yeah, be careful around the Whale Shark.

I took a break from swimming around Vashj'ir to go run some dungeons, which we'll cover later - but until then, just look at the pretty Kelp Forest above.

(Seriously guys, I'm not joking about how awesome the intro to Vashj'ir was. Without spoiling anything, it may have been the single coolest moment I've seen in WoW in a very long time. Also, the new water effects make the water actually look like water and not like tiles someone pasted onto the ground.)