How do you follow up a videogame based on Penny Arcade? If you're Hothead Games, you make your next RPG even more insane. 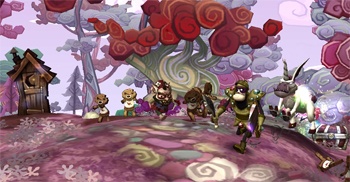 When it comes to RPGs, Hothead Games doesn't want to just put out the same thing over and over again. In a conference call with the development team for Deathspank, the studio's soon-to-be-released action-RPG (initially created by Ron Gilbert), it was explained that the studio wanted to create something bigger and crazier than its previous titles. From the sound of things, it seems like Deathspank will easily pull this off.

"From a design standpoint, one of the big struggles... was going from the turn-based, static style of combat to a fluid style of combat," said Darren Evenson, the game's lead designer. "Making that system took some time and a few tries... it's a very different system."

It sounds fun, too. At one point during the call, the Hothead team explained how the Repeating Crossbow will not only fire as fast as players can press the attack button, but that you will see every arrow sticking out from an enemy, "like a porcupine."

The fluid combat is expected to make the game more exciting than the Penny Arcade titles, too. "Our first experience was more laid back; you were in the back of your chair. We wanted to create something that was more 'edge of your seat'," said Vlad Ceraldi, the game's executive producer. Not only that, but Hothead is aiming for bigger laughs than it did last time.

"I think we're the first game to have a leaderboard for 'Most Chickens Killed,'" joked Ceraldi. The game's irreverent, twisted sense of humor doesn't end there, either. Players can also expect to see a lot of poop jokes, since outhouses will serve as checkpoints, respawn areas, and teleportation locations. Other humorous items mentioned during the call included a sock, "turtle gonads", and C-4 charges.

Based on what the development team revealed today, as well as footage available on the official website it looks like this will be a blast. Ceraldi certainly seems to think so. "I think we definitely found the chocolate/peanut butter combination of videogame form," he said.