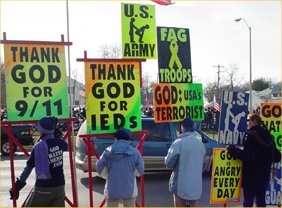 An extremist church is planning to protest this year's San Diego Comic-Con because it thinks everybody is worshiping Superman like a God.

Here we go again. The Westboro Baptist Church, not known for being the friendliest bunch of people, will be gracing us with their presence at this year's mecca of comic book fandom: San Diego Comic-Con. If you weren't lucky enough to get your hands on a ticket to Comic-Con this year, you can at least stop by and take a gander at this group of probably nutty and definitely distasteful protesters to enjoy their hatred of comic books. Seriously, they're a pretty nasty bunch, as we can see from one of their protest signs in the past that read: "Thank God for 9/11." Wonderful.

San Diego Comic-Con 2010 runs from July 22-24, but thankfully the Westboro Baptist Church will only be around from 1:15-2:00 PM on July 22. According to their schedule, the reason they don't approve of characters such as Superman, Batman, Wonder Woman, Spider-Man, the Hulk, Iron Man, the Thing, Captain America, Wolverine, Thor, the Flash, the Silver Surfer, and Archie is because they're been turned into idols and are now worshiped as so. I like to read a good Batman story from time to time, but I don't think I've ever closed my eyes and prayed to the Dark Knight.

Are you kidding?! If these people would spend even some of the energy that they spend on these comic books, reading the Bible, well no high hopes here. They have turned comic book characters into idols, and worship them they do! Isaiah 2:8 Their land also is full of idols; they worship the work of their own hands, that which their own fingers have made: 9 And the mean man boweth down, and the great man humbleth himself: therefore forgive them not. It is time to put away the silly vanities and turn to God like you mean it. The destruction of this nation is imminent - so start calling on Batman and Superman now, see if they can pull you from the mess that you have created with all your silly idolatry.

Could the nation really be destroyed thanks to Superman? Or Archie? Is it time to stop reading about the tales of Jughead Jones lest we all burn in the flames of Hades? I sure hope not, but anything is possible I guess. But really, it'd probably be best to stay away from this group for the 45 minutes they're outside Comic-Con, though I pretty much can't wait to see what their picket signs will say.