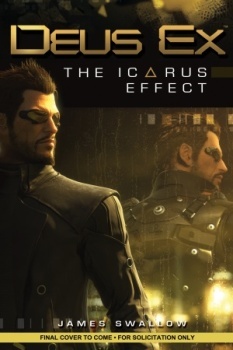 Sci-fi imprint Del Rey has announced Deus Ex: The Icarus Effect, a novel written by James Swallow based on the famed videogame series.

Set in the technologically-advanced but conspiracy-laden near future, Deus Ex: The Icarus Effect follows the adventures of Secret Service agent Anna Kelson and special-ops soldier Ben Saxon. As they come dangerously close to "the truth," they must make choices that could alter the very direction of human history and possibly send it spinning off into a new Dark Age.

"The novel is set in the Deus Ex universe and there will be characters and story elements in it, that will overlap with our next videogame Deus Ex: Human Revolution, which we hope fans will be very excited about," Eidos Montreal Marketing Game Manager Andre Vu said.

Deus Ex: Human Revolution is a prequel set 25 years prior to the events of the original Deus Ex. Players will take on the role of Adam Jensen, a private security officer at a company doing pioneering work on "augmentations" that can give humans unique powers. Forced to undergo augmentation himself after an attack on the company, Jensen finds himself drawn deep into a world of shadowy conspiracies and powerful secret societies.

Swallow's first book was the 2001 steampunk Western release Ghost Town, the first part of the Sundowners series, and he's also written novels based on Warhammer 40K, Star Trek, Stargate, Doctor Who and 2000AD. He's had some previous experience with the videogame industry as well, with credits in games including Star Trek: Invasion, Maelstrom and Killzone 2. Deus Ex: The Icarus Effect is slated for release in North America and Europe in February 2011, with Deus Ex: Human Revolution set to follow close behind in March.