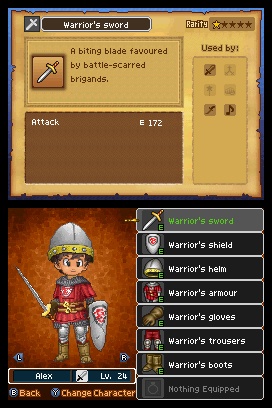 In case you hadn't heard, Dragon Quest IX: Sentinels of the Starry Skies is out here in the West, the latest title in the long and storied JRPG franchise. Like all of its predecessors (and many other JRPGs in general), DQIX is turn-based - which series creator Yuji Horii thinks may be working against it in the Western media.

"I wonder sometimes why the US reviewers are more negative towards turn-based battle systems," Horii mused in an interview with IGN, arguing that a slower pace of play had its benefits. "Real-time play has fun aspects too, but for this type of game there is more strategy that comes with a turn-based system. Also, you can play with other people in [the game's multiplayer] and decide what actions to take together."

Honestly, I can't help but both agree and disagree with Horii's statement here. He's absolutely right in that a turn-based system is simply a development choice and doesn't inherently make a game any worse - chess is turn-based, isn't it?

But I'm not sure I agree with him that there is a noticeable anti-turn-based bias in the Western media, certain motormouthed Brits excluded. Pokemon is turn-based, and it still gets praised, and the same goes for the Civilization series. Meanwhile, Horii's own DQIX is performing perfectly respectfully in Western review circles.

Most of the bias I see against JRPGs has to do with their trappings and narrative elements as well as their linearity - not the turn-based system. But then again, I do love me some Pokemon, so it's possible that I'm biased against the bias of the rest of the media, perhaps.

Of course, that's not to say that Horii is against real-time combat in games, either - when asked what modern RPGs he liked and had influenced him, he gave a decidedly Western answer. "The Elder Scrolls IV: Oblivion. I like that a lot."

The Long and Short of RPGs Susan Arendt 65 Comments