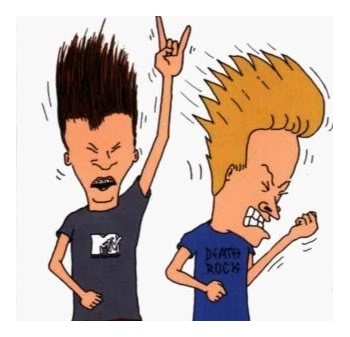 Beavis and Butt-head, the world's most famous addle-brained slacker metalheads, are making a comeback.

The animated duo of Beavis and Butt-head were spectacularly empty-headed, destructive and offensive headbangers who spread heavy metal woe wherever they went. They were also hugely popular throughout the 90s, to the point that a surprisingly entertaining full-length movie, Beavis and Butt-head Do America, was released in 1996. In 1997, after 200 episodes, the show finally went off the air.

But now it's back, or at least it will be soon, according to MTV, which told the New York Post that work is currently underway on a new series of episodes. The new episodes will maintain the same "minimalist" (which is to say, not very good) style of animation the series is famous for and the pair will still be in high school, dressed in their customary shorts and t-shirts, but will feature the current generation of musicians and movies, along with the usual snarky commentary aimed at all sucks about it. Mike Judge, who created the original show and voiced both characters, is behind the new series.

I'm not sure how I feel about this. Beavis and Butt-head was one of the stupidest things I've ever seen on television and I lamented the fact that such sub-standard garbage could become an entertainment touchstone for an entire generation. But it also made me laugh a lot. So yeah, I'm probably going to watch. The new Beavis and Butt-head episodes are expected to come out next year.