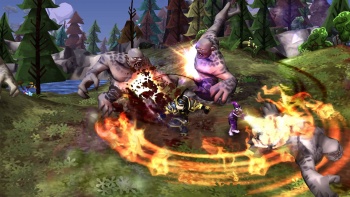 Will DeathSpank open the door for a whole new world of downloadable titles? Ron Gilbert hopes so.

When you grab a game from XBLA or PSN, it tends to be a years old classic, or a new game built on a smaller scale. But veteran game designer Ron Gilbert thinks that developers can do more than that with downloadable games, and hope that his new game DeathSpank will blaze a trail for others to follow.

Gilbert says that DeathSpank's design wasn't altered because the game was a download only, and that he doesn't think there's much like it available at the moment: "The game is very different from a lot of stuff that's in the download space," he said. "I'm kind of hoping in a way that it'll open up the door to the Xbox and the PSN having more games with some real meat on them ... and that we can get some really good, interesting games in the download space."

Whether DeathSpank is the title that heralds a new age of downloadable games remains to be seen, but it's hard to argue with Gilbert's vision. Encouraging developers to do new and interesting things is something that few gamers are going to say is a bad idea.