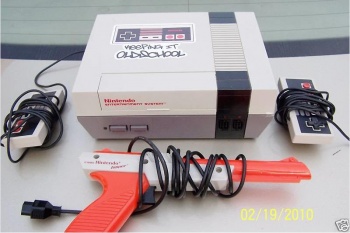 Making money to pay off debt is apparently as easy as listing your favorite videogame system on eBay for way more than it's worth and asking nicely.

Do you have a lot of unpaid bills? Are financial problems getting you down? Simply find an old gaming system and overprice it by a factor of 100 like ronald3868, who was supposedly down on his luck and looked to the world of internet auctions to annihilate his woes by listing a Nintendo Entertainment System on eBay for $35,000.

He writes in the auction:

I am down on my luck need to pay bills living pay check to pay check. this is my price possession the only thing I can say I own 100%. to some a nes system could mean nothing but to me its priceless. I hate to part with it but i need the money. You might say what a ridiculous price but thats how hard it is for me to part with it. I have 100% feedback. whoever buys it can verify that I really need the money. I can show you my bills and credit report to verify it and I will give proof that the bills got paid. I would like to personally hand over the nes bundle system over to the winner and personally thank him/her if possible. God bless.

Hm. Hi everyone. I'm a down-on-my-luck videogame writer. I have bills that need paying. My prize possession is not a regular old Nintendo, but a Super Nintendo with about 30 games. Does anybody want to buy the whole set for $75,000? That's a sweet deal, and I really need the money, I promise.

[UPDATE]Surprise, the seller didn't get his money. However, he did relist the NES for $35,000. Good luck.