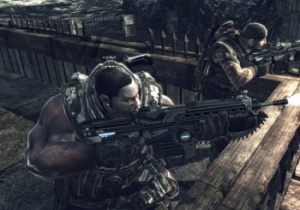 Epic Vice President Mark Rein says that he had been a "jerk," but that he'd only been trying to help.

Last week Rein upset Positech Games' Cliff Harris by interrupting him during a panel at the Develop conference when the topic turned to communicating with fans. Harris said that Rein started to lecture him about what they were doing wrong, and was of the opinion that Rein had attended the panel just to sneer at the "humble indies." But Rein says that his comments were made with the best of intentions, but said that interrupting the panel was "completely rude."

In a letter to Harris, Rein said that his point had been misconstrued, and that he hadn't meant to imply that he thought that replying to fans' emails was a waste of time. His outburst had been motivated, he said, by the idea of sharing important details about games in emails and on message boards. He said that he believed that that could actually make things more difficult for an indie developer to get its work noticed.

Rein said that he wasn't speaking as an executive of a major studio, but was instead drawing on his experiences from Epic's early days. He said that when Epic was getting started in the early nineties, it made shareware titles with a distribution model similar to those of Harris and Positech, and by being careful with how it disseminated information, it was able to get its games featured in "top gaming magazines" alongside much bigger titles.

Epic was very keen to support independent developers, he said, and cited the "Make Something Epic" contests it ran for indie and aspiring developers, and the release of the UDK, which let people work with the Unreal Engine for free, and then pay a small licensing fee if they then made a commercial product. He thanked Harris for calling him out on his behavior, and said he realized that it was something that he had to curb in the future. He apologized again at the end of his letter, saying that his intentions didn't excuse his bad manners, and that he hoped that the experience had taught him his lesson.

There are a number of ways to interpret the letter, and they largely hinge on how genuine you think Rein is being. It certainly sounds like an honest, heartfelt apology, but it could just as easily be some PR spin. It will be interesting to see what Harris himself has to say about it.