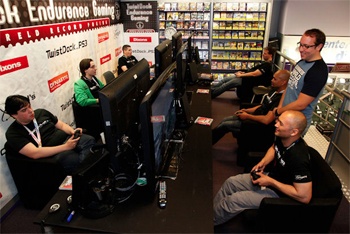 A group of Dutch gamers have set a new world record for playing videogames by playing Red Dead Redemption for over two days straight.

Playing a videogame may seem like a strange way to go about attaining a world record, but it's a new claim to fame for six Dutch gamers. By playing Red Dead Redemption for 50 hours straight this past weekend, these gamers have earned recognition from the Guinness Book of World Records, as well as somewhat fabulous prizes.

Apparently the marathon event began as a competition at a Dixons store in the Netherlands, where the six gamers started out competing with one another. At some point, though, the group decided to make a collective go at the record. All six young men are going to receive the Guinness recognition, $1300 in prize money, and a Twistdock setup.

Previously, the world record for playing a videogame was a little over 40 hours, held by a gamer from India. The Dutch players, however, apparently played for 50 hours with no breaks (presumably, they were allowed to go to the bathroom and eat while they played), which is pretty remarkable. Not only that, but it looks like the guys enjoyed themselves the entire time. I can't go for more than about 30 hours of sleep before I feel an overwhelming need to crash, even with the aid of energy drinks.

Gallery of the Day: 8 Video Games Everyone Needs To Play DrStrangelove 35 Comments

Featured Articles: For Want Of A Horse, The Game Was Lost Rachel Verkade 52 Comments
Comments on