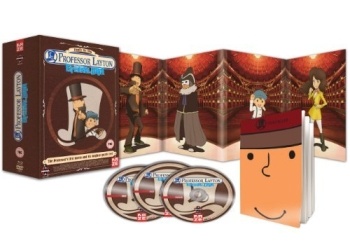 The film will be released in both single-disc DVD and Blu-Ray editions, but the real prize for series fans is the collector's edition. The DVD + Blu-Ray "Combi Pack," priced at £49.99, includes both the DVD and Blu-Ray discs, a disc of special features, and a book of storyboards, all packed in the beautiful fold-out package pictured to the right.

The story of Professor Layton and the Eternal Diva, written by Level-5 CEO Akihiro Hino, begins with the professor receiving a letter from a former student, acclaimed opera diva Janice Quatlane, inviting him to accompany her to the Crown Petone Opera House. After an incident at the theater, the professor and his assistant, Luke, are drawn into investigating a series of mysterious kidnappings. The duo will have to dive into the history of the opera house and, likely, arrange a few matchsticks before a horrible fate falls upon the kidnapper's latest victims.

Although the movie is currently only scheduled for a UK release, eager importers can grab it from Amazon UK simply by signing into your existing Amazon account. The movie will be both dubbed and subtitled into English, so the primary barrier for Layton fans will be the potential region encoding on the discs. Blu-Ray discs are often released without any region protection on them, but importers are recommended to hold off until we receive some sort of conformation from Manga UK.