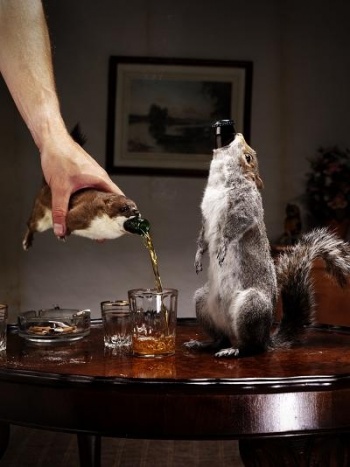 Beer is a tasty treat for those old enough to enjoy it, unless perhaps it's encased in a dead squirrel.

Scottish brewing company BrewDog has come up with the most unique beer bottle type you'll ever see: a dead animal. Not only is its "End of History" beer the world's most powerful, but it also comes encased inside either a grey squirrel or a stoat (a small weasel). These aren't fake animals either; they're actual road kill.

End of History is described as a "blond Belgian ale" that has 55% alcohol content. Many beers run less than 5%, so this is quite a lot. Only 11 bottles are being made: 7 stoats priced at around $771 each and 4 grey squirrels priced at $1080. Snooze and you'll always lose, as all 11 bottles are already sold out.

BrewDog says End of History is "a perfect conceptual marriage between art, taxidermy and craft brewing. The bottles are at once beautiful and disturbing - they disrupt conventions and break taboos, just like the beer they hold within them." Every bottle comes with a certificate of authenticity. I seriously doubt that's necessary.

This is a pretty cool/extremely creepy and weird idea. End of History works well as a piece of art or an artifact to keep around, but I don't think I could take a sip of a beer when a dead animal is staring me in the face as I do it.

One Button, One Scotch, One Beer L.B. Jeffries 40 Comments