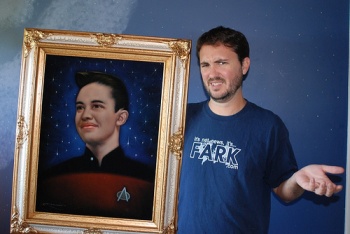 Long hailed as a scourge upon the Enterprise by a vocal minority, Wil Wheaton showed us that not every fan hated Ensign Wesley Crusher.

For some reason, Ensign Crusher got a bad rep. My older brother hated him on Star Trek: The Next Generation, pointing out that having a teenager on the bridge of the Federation's flagship was probably not a good idea. I remember being somewhat inspired by Crusher's position, being young at the time, and never understood why he was so castigated, eventually forcing him to leave the show. It appears that I wasn't alone.

At The Guild panel at San Diego Comic Con 2010, one audience member asked how it felt to go from being the most hated character on the starship Enterprise, to the most hated guild leader of the Axis of Anarchy, Fawkes. To prove that the premise of the guy's question was faulty, Wheaton took an informal poll of the audience.

The crowd went nuts, cheering and whistling for about 20 seconds before Wheaton added, "As I've gotten older and the people who watched who were around the same age as me have gotten older, I've learned that the people who were like 'We hate you and here's the 67 ways we want you to be impaled by a Klingon and killed' were truly a very vocal and cruel minority. There were a lot of other people who were too young to be on Usenet."

Now, the audience at Comic Con may be a bit biased, but I can safely say that the majority of nerds packed into that panel loved Ensign Wesley Crusher for what he was: a naive but brilliant kid trying to be a man in a setting that was much bigger than him. That's something a lot of nerds can relate to.

Movies and TV: Everybody Lives: How Doctor Who Saved Science Fiction From Pessimism Fanghawk 17 Comments
Comments on