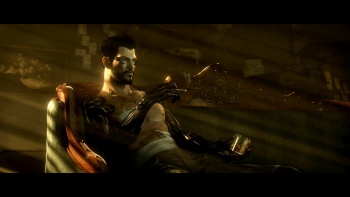 Deus Ex: Human Revolution director Jean-Francois Dugas says that the Eidos Montreal team didn't quite understand the aim of the game in the early days of the project.

The amount of player choice in Deus Ex: Human Evolution provided some pretty unique challenges, said Dugas, because making things a player might not ever see didn't come naturally to his team.

Dugas said that the high cost of game development had created a culture where everything a team built had to be something that the player would actually see, so convincing his team to make things that might be missed entirely was difficult, and that he had to stress that the whole point was letting players explore the game however they wanted and not leading them around by the nose.

Eventually, everyone understood what the game was meant to be, Dugas said, even if it did take a little time. "At some point, everybody got on board with it," he said. "But at first it was tough to get all the people on properly, because they are not used to making that kind of game."

It's interesting to get a glimpse into how averse some game developers are to "wasting" time, money and effort on things that players won't necessarily see, even in a game where player agency is such a big deal. It's also interesting - and quite gratifying - to see how seriously Dugas is taking player choices in Deus Ex: Human Revolution.