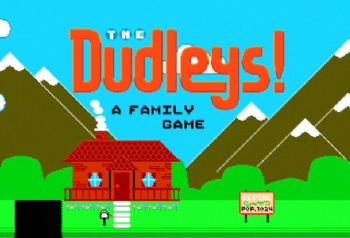 The last thing many gamers want is to be dragged to a play, unless perhaps it's to 8-bit play The Dudleys!.

Can plays be cool? As it turns out, yes they can. A new play written by New York City playwright Leegrid Stevens called The Dudleys! looks to combine the digital world with the real one, using 8-bit graphics and chiptunes as a musical score.

Stevens describes The Dudleys! as a play that "takes the adolescent memories of a man and translates them into a malfunctioning 8-bit video game." The main character plays through a game of his family fifteen years ago. It might be a tearjerker though, as it follows the family in the aftermath of a father's death, meant to put the "two dimensional world of happy endings up against the confusion and aimlessness of real life."

Still, the basic idea for The Dudleys! is really cool, as it uses 8-bit animation (sample here) as a back-up to real-life actors and a live orchestra not of tubas and timpani, but of Ataris, Game Boys, and Commodore 64s. More detailed information on the characters is available on Stevens' website.

The Dudleys! opens on August 30, 2010 at the Theater for the New City in New York, NY. Tickets are $15 each and can be purchased here if you're interested. Finally, a play that might be able to keep me from falling asleep without having to bring my Nintendo DS.

The Dudleys! via Joystiq

Editor's Note: The Way of the Future Greg Tito 6 Comments
Comments on