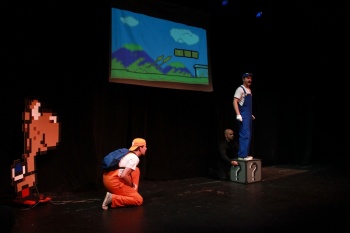 What are the characters from Super Mario Bros. really thinking about their constantly repeating predicaments? A DC-area musical explores this question with song.

I thought that this NYC play that incorporated 8-bit graphics and music was pretty cool, but now there's something videogame related that's even better. Washington DC's Super Claudio Bros. is a musical that explores what it's like to be the characters from a Mario game.

The well-written production was named best musical at the 2010 DC Fringe Festival, where Joystiq found it to be "less a parody of a classic game world than a loving meditation on what those characters might actually be thinking should their unfortunate situation be made real," and "really good." The songs from Super Claudio Bros. available on its website, such as "Game Over" and "Player Number 2," are funny, exploring what surviving characters might be thinking when Mario dies and has no continues, or how Luigi feels being eternally stuck as player 2.

Claudio brothers Luis and Claudio live in the Eggplant Kingdom and their arch-nemesis is a homicidal purple platypus named Bruiser. Bruiser kidnaps Princess Tangerine once again to start the show off, and it follows the inner thoughts of the Claudio Bros. and Tangerine's sister Princess Fish as they set out on yet another rescue mission. Co-writer Drew Fornarola told Joystiq he wanted to explore: "What do [the Mario characters] love and hate? What do they worry about? What happened that made them the way they are?"

Jokes are made that refer to the Mario games, such as the first castle never actually housing the real princess. Possibly due to mainstream knowledge of Mario and his games, even non-gamers have been giving Super Claudio Bros. good reviews. Sadly, you may never see it if you don't act fast, as the last shows currently scheduled are for tonight and tomorrow only (tickets available here). Hopefully it'll continue and make it to more cities.