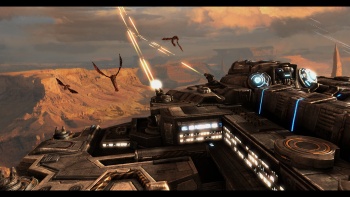 In just a week, StarCraft II has sold more copies in the UK than its venerable elder brother StarCraft had sold over twelve years.

And they say PC gaming is dead: RTS kingpin StarCraft zerg rushed sales charts following its midnight launch last week. It topped the all-formats chart in the UK, knocking the entire list down a spot - becoming the first PC-exclusive title to do so in all of 2010 (and presumably since The Sims 3).

According to Chart-Track, StarCraft II racked up more sales of boxed copies in the UK in a week than the first StarCraft did over its lifetime. Given that the sources in question only track sales of boxed copies, it's possible that SC2 may actually have sold even better than listed when factoring in digital distribution.

Back in 1998, StarCraft entered the all-format charts at #24, and wasn't even the best-selling PC game of the week (that honor went to Star Wars Supremacy). My, how things change.