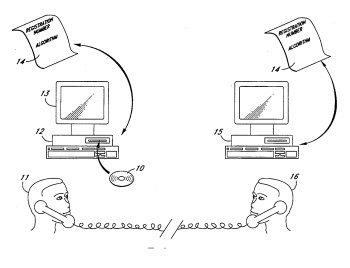 Digital security company Uniloc has sued Sony, Activision Blizzard, Aspyr and other companies over claims that their DRM infringes upon its 1996 patent for "a system, device and/or method for reducing software piracy."

Uniloc, which offers technology that "provides integrity at the net's edge, evolving beyond simple access protection to provide peerless identification, security, and integrity within a trust environment," was given patent number 5,490,216, entitled "System for Software Registration," in 1996. Specifics of the patent weren't made clear (although they're available for your perusal at the U.S. Patent and Trademark Office, if you're interested) but now, 14 years later, Uniloc has decided that Sony, Activision and others are drinking its milkshake, and it wants them to pay for it.

Uniloc alleges that the companies named in the suit have "directly and/or indirectly infringed at least one claim of the '216 patent... by, among other things, making, using, offering for sale, selling and/or importing a system, device and/or method for reducing software piracy, reducing casual copying and/or reducing the unauthorized use of software." Sony's SecuROM, Activision's product activation and registration system, Aspyr's product registration system and others are named as specific examples of infringement which have caused "reparable and irreparable damage" to Uniloc.

I'm not a lawyer so I don't want to start passing out the "patent troll" signs just yet, but I think it's worth mentioning that the California-based Uniloc filed suit in the U.S. District Court for the Eastern District of Texas, which has been notorious for some years as an extremely "plaintiff-friendly" court in patent disputes. This lawsuit is also apparently similar to one Uniloc filed in 2003 against Microsoft that resulted in a record-setting $388 million judgment in its favor. That verdict was overturned by a judge in September 2009, although Uniloc vowed to appeal that decision.

A full copy of Uniloc's lawsuit is available in PDF format from the Entertainment Consumers Association. Allegations that Uniloc's mission statement was actually constructed by the website "WTF is My Social Media Strategy?" remain under investigation.