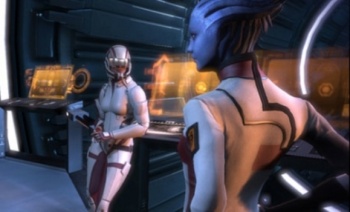 Mass Effect 3 picks up where its predecessor's story left off, but that story could have ended in any one of hundreds of subtly different ways.

Fans of the Mass Effect series know that your actions in the first game shaped the way the second played. Not just the big events either, but little ones like how you interacted with a particular NPCs or how you completed certain sidequests. There are no plans for Mass Effect 3 to rock the boat on this score, but BioWare admits that the number of plot variations for people who had played the first two games is pretty big.

ME2's project lead Casey Hudson said that if someone has played through both Mass Effect 1 & 2, then the number of variables was over a thousand. He added that the big details for the plot were decided in advance, but for the smaller things, BioWare took records of what choices players made, and then passed that information along to the writers so that they could refer to it when building storylines. Hudson said that this method was not only easier than trying to do everything all at once, and it also gave better results. "It would be impossible to plan it all in advance," he said. "More importantly, we'd never be able to plan as many creative opportunities if we'd do it all up front."

The sheer number of branches that the Mass Effect story can take is incredibly impressive, and even if most of the variations differ only in very small details, it still shows off how much there is to do in the games. BioWare has begun work on Mass Effect 3, but it's not got a release date yet.