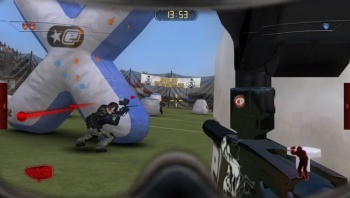 Activision allegedly tried to steal the identity of paintballer Greg Hastings for use in paintball videogames.

Whether you've heard of famous paintballer Greg Hastings or not, he has some interesting things to say about how Activision handled his videogame paintball sim. With Majesco's Greg Hastings Paintball 2 set to revolutionize the world of paintball games (no, really, according to Hastings), why isn't the series still being handled by Activision? Hastings alleges it's because he had to "fire" the publisher.

Talking to Games Radar, Hastings said: "I had to fire Activision for doing such a poor job." However, this was more than just a case of neglect or shoddy management.

Hastings continued: "Activision tried to steal my franchise. Within 24 hours of me shipping my PlayStation 2 game, Greg Hastings Tournament Paintball Max'd, they sent me a letter and they said, 'We feel you've abandoned your franchise, and we're going to commence making games called Greg Hastings Paintball without Greg Hastings.'"

There was apparently then a court battle which Hastings won, allowing him to create Greg Hastings Paintball 2 with Majesco. "They made us spend a whole pile of money and we won unanimously in court," he says. "A billion-dollar company tried to steal my identity, and I was able to fight and regain my identity. That's why I'm on cloud nine; I fought the giant and I'm a success story against Activision."

This has not been Activision's month. Since the beginning of July, the company has gotten more than its share of bad press, including Tim Schafer hating on Bobby Kotick, Infinity Ward alleging it ran a "police state", and anonymous sources accusing it of sexism. This is one situation where the facts don't appear to lie: Hastings went up against Activision and won unanimously in court. If the higher-ups at Activision are engaging in immoral business practices, I don't approve, but even I'm starting to feel bad as their reputation seems to be tarnishing.