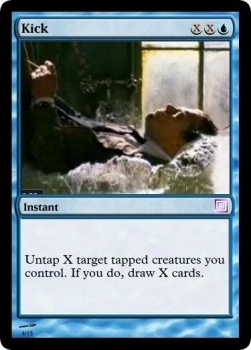 For all of those gamers out there eager to step back into the world of Inception, one fan had dreamt up Magic: The Gathering decks based on the film.

The recent blockbuster Inception boasts such a perfect confluence of factors - explosive set pieces, distinctive character classes, a set of rules controlling the dream worlds, and an extensive focus on timing - that it honestly comes as a surprise that nobody has tried to license it for a game of some variety. Still, while gamers won't be able to commit acts of inception on their home consoles, one fan has provided a way to revisit the characters and setting of the film with a homemade card game based on the popular Magic: The Gathering.

Jamie Bard, a contributor to the Geekosystem blog, has created two complete 40-card decks - modeled after the theme of Extractors versus Dreamers - which recreate the settings and characters of the film within the rules of the Magic: The Gathering card game. To give an example - just as the characters in the film created dreams-within-dreams, the "We Need to go Deeper" card creates a game-within-a-game, effectively resetting both players.

Players that want to give the decks a try just need to print out the images, glue them to existing cards, and throw in some land pieces. Until a videogame or table-top RPG comes through official channels, this looks like one of the more interesting implementations of the ideas and mechanics proposed by the film.