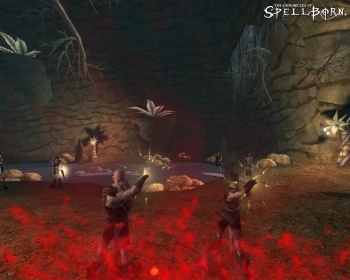 Playdom has confirmed that the MMOG Chronicles of Spellborn will be shut down next month, resulting in anguished and angry protests from tens of gamers.

It's been a little more than a year since Chronicles of Spellborn launched in North America, following its European debut in November 2008. The ride has been rough ever since; developer Spellborn Works went bankrupt in June 2009, which led to a relaunch of the game as a "free-to-play" title. But the troubles continued, as publisher Acclaim was bought out in May 2010 by Playdom, which was itself acquired by Disney two months later. Players, meanwhile, were apparently left to struggle without moderators, administrators or any other form of support, leading to suspicions of the worst when the servers went offline without warning earlier this month.

It was an email from Games.com that eventually cleared things up and also led to one of the more bizarre instances of good news/bad news I've seen in recent months. According to the response from Playdom, the servers were down temporarily due to a "technical issue" that had nothing to do with a planned shutdown of the game - but the game is going to be shut down.

Like just about everything else related to Chronicles of Spellborn, its pending closure has the distinct look of a wrecking train. There is still no official announcement of the coming shutdown on either the Spellborn website or the support forums; by all appearances, if Games.com hadn't sent that email, nobody would know that the plug is less than three weeks away from being pulled. That's the kind of classy approach to customer service that you just don't see every day.

The obligatory "Rescue Spellborn" internet petition has been up for four days and has garnered, at last count, a total of 99 signatures. The Chronicles of Spellborn is fully expected to close on schedule.