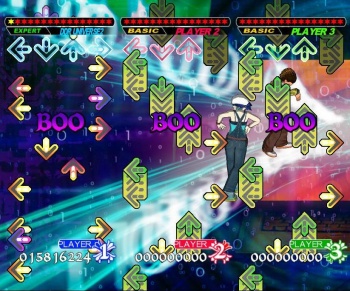 Faith may have led an ordained minister to become the "dancing preacher," a world record holder in Dance Dance Revolution.

Some people's religions compel them to feed the homeless. Others travel to impoverished nations to provide medical care. For 27-year-old ordained minister Sterling Franklin (aka Djsterf), it's all about Dance Dance Revolution.

Franklin holds multiple DDR world records and combines his love of the game with his love for the omnipotent. He says: "I sense that the Lord is calling me, and I like DDR." He's been able to use the game to make his services more unique, and has been nicknamed the "dancing preacher." He connects religion with DDR in his sermons by saying things such as: "He's watching all the time, so you want to do your best."

He admits this is a little bit off-beat. "I would rather just preach, to be honest, but with the dancing preacher, I get to do what I love both ways," he says.

Franklin hasn't been able to find a steady preaching gig, partly due to the fact that many employers are looking for a family man. But it's not easy for Franklin to find a woman that enjoys both of his primary interests. He lays down the law: "Unless she's into games and godly, I'm not really interested."

And what of those that think dancing leads to impure thoughts, or worse? He has a message for those folks: "Some Christians don't approve of dancing because it can lead to other things. David danced before the Lord, so I don't think it's a bad thing."

"People have hobbies," he says. Franklin currently spends his days practicing to capture new DDR records on his very own $2,200 two-player arcade machine. I'm terrible at Dance Dance Revolution, so I truly believe Franklin's feet are guided by a higher power. That game is hard.