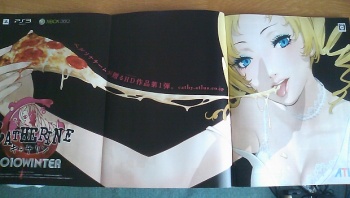 It's been almost two years since Atlus' PS2 epic Persona 4, and fans of the series have been eagerly eating up rumors about a potential Persona 5 like Chie Satonaka eating up the Endless Beef Bowl.

Well, Persona fans, you're going to have to wait a bit longer for a proper Persona 5. But that doesn't mean the Persona team has just been sitting on its hands all this time: Earlier today, the team revealed its next project, Catherine, which is the first game that it has developed for the modern "HD" consoles.

Catherine is the story of a 30-year-old man named Vincent who encounters a much younger woman called Catherine, who seems to have a predilection for eating pizza suggestively. Soon after meeting Catherine, Vincent begins to have a recurring nightmare in which he is climbing a never-ending staircase, and ... uh, we don't know the rest yet.

Also, that explains the emphasis on the character's breasts. While the Persona series has always been known for its willingness to tackle serious issues like suicide and sexual identity, it's very interesting that the very first images we've seen of the game (and the eponymous female character) are things like this and this. It's intentionally and remarkably sexual, and it sets a very different tone for the game right from the outset.

The worst Persona 4 ever got was the whole faceless stripper bit. Though I think that wins out on the "creepy" scale.