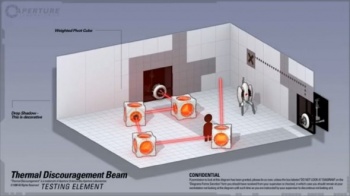 PlayStation 3 owners haven't had the most support from Valve, and the developer says that it wants to make it up them.

After a less-than-stellar version of the Orange Box and the complete absence of the Left 4 Dead games, it's safe to say that PS3 owners got a bit of a raw deal from Valve. The studio said that it didn't feel like it could deliver the kind of experiences that PS3 owners deserved, so it until it could put together a dedicated team, the PS3 would remain Valve-less.

All that changed at E3 in June however, when Portal 2 was announced for the console, and it seems that that is just the beginning. Erik Johnson, a project manager for Valve, says the studio is keen to make it all up to PS3 owners, and that Steamworks - which was announced alongside Portal 2 - would be a big part of that.

It's a little tricky to square away Valve's new attitude with its previous comments about the PS3, but even when Gabe Newell was calling the machine a "waste of time," it was the case that Valve was worried about doing a good job on the console. If Steamworks allows Valve to do that, then it's hard to see a downside.