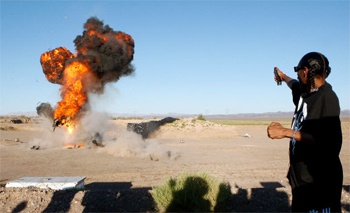 Last week's high-profile destruction of an armored car at the hands of Snoop Dogg earned casual games publisher Zynga a lot of attention. Yes, it was big, loud, and dumb, but it also featured explosions and a famous rapper. The stunt - which was promoting the launch of Mafia Wars Las Vegas - was clearly worth whatever it cost, because Zynga says that over 2 million people viewed the live Ustream video of the event.

While 2 million viewers on the Web may not seem like a huge number when we're talking about a company that deals with more than 80 million users for just one of its games, it's still pretty impressive. The event drew a higher number of viewers than Ustream received when it broadcast the world premiere of Twilight: Eclipse earlier this summer. Meanwhile, VentureBeat gave a great example of how the number was higher than the viewership many TV shows received last week:

Of course, this was the less-controversial marketing ploy that Zynga initiated for the game over the past few days. When the company glued a ton of fake $25,000 bills to the sidewalks of San Francisco, which the city was none-too-pleased about. Seeing as how this tactic has resulted in City Attorney Dennis Herrera threatening Zynga with a lawsuit in order to recover cleanup costs, perhaps the publisher should just stick to blowing up cars in the desert.