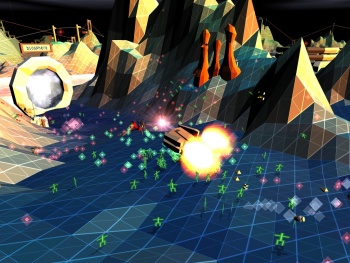 The powers of digital distribution, Steam, and achievements have saved independent developer Introversion from dissolving.

Introversion Software is a videogame studio based in the UK known for games such as Uplink and Darwinia that explore Tron-like virtual worlds and hacking. Despite money troubles in the past, Introversion's successes have always been able to keep it above water and moving towards future titles. That was until recently when the release of Darwinia+ on XBLA didn't sell very well and Introversion nearly shut down completely, but Steam came along to the studio's rescue.

Introversion's Mark Morris wrote on the company's blog that Darwinia+ had unexpectedly taken three years longer to create than estimated. Along with other projects the studio had in development, money was running out and the success of Darwinia+ on XBLA could either make or break Introversion. Morris reveals that sales were low: "Internally we knew within about an hour of Darwinia+'s launch that it hadn't done well enough. It took us about two weeks to really accept that and the awful realization that we didn't have enough to continue with the office or the staff."

Morris called this point "rock bottom" as Introversion was forced to let all of its staff go, and even the studio's four remaining key members didn't have any desire to continue the fight. Things looked grim, but an idea sparked to add achievements to Introversion's Steam version of DEFCON to get Valve to run a promotion for the game. 21 achievements were added, and Valve agreed to run a promotion that put four Introversion games on sale for $5 total. It might not seem like selling four games for $1.25 each would be able to save a studio, but it was.

The sale brought in around $250,000 of revenue, which was quite a lot for the slimmed down four-person team. With a year of capital now in the bank, Morris says the whole ordeal only brought the team closer together. They're now working on the upcoming Subversion, the team's "most ambitious game to date," with renewed energy. Just another positive bit of press for Valve and Steam, which is giving small developers not only the ability to survive, but exist entirely.