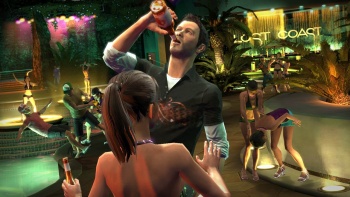 This is Vegas's expensive development was taken over by Warner Bros. once Midway bit the dust, but it may have been canceled anyway.

Warner Bros. Interactive Studios bought almost every asset from the failing Midway last year, which included This is Vegas, on which tens of millions of dollars had already been spent. Those millions may now have been flushed down the tubes, as sources close to CVG are saying that This is Vegas has been canceled, and its developer Surreal Software was quietly shut down with employees dispersed amongst other projects.

"Apparently the entire This is Vegas project has been totally canned," said a "cast iron" source supposedly close to the project. "Midway spent in the region of $43 million up to the point when it was being sold to Warner Bros. Alan Patmore, who was [Surreal Software] studio boss, either left or was let go - but considering the resources and art created this is a lot of work down the drain."

The source says This is Vegas was on track for release at the end of 2009, but required 8-12 months of more development with a "studio burn rate of $250,000 per month." The game was an open world Grand Theft Auto-style experience where players had to bring the grit back to Las Vegas after businessmen were trying to make it family friendly.

"It's a ridiculous waste of money, a silly budget when you think that games like Konami's Saw - which made profit - were built with around $3 million and Blacklight: Tango Down was made for $2.5 million," the source believes. Games like these aren't easy to make, and This is Vegas had the poor fortune to be caught up in the dissolution of Midway, so perhaps Warner Bros. didn't think it was worth it to finish the game up. The rumors of This is Vegas's cancellation have not yet been officially confirmed.