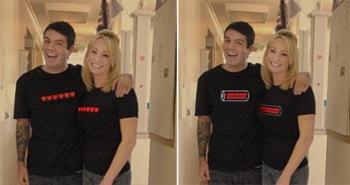 A shirt that lights up with hearts when another is nearby sounds like a cute idea. Too bad it was cloned from another design and marketed using another person's photos.

We've all heard stories about how, when a person finds that special someone they're meant to be with, it's love at first sight and both people seem to light up. The Love Meter Shirt, it turns out, takes the hard work out of finding your soul mate, provided that they've got the same fashion sense you do. Unfortunately, the shirt itself is a blatant copy of the 8-Bit Dynami Life Shirt sold at ThinkGeek.

The idea is that this shirt features an image of a battery on its front that normally lights up a portion of the hearts inside the battery. However, when a wearer stands close to another person wearing the same type of shirt, all the hearts become lit. While copying the concept might be forgivable on its own - after all, we've all had moments where inspiration struck and gave us the same idea that someone else already had - whoever manufactures the Love Meter Shirt clearly knew they were stealing someone else's idea.

According to Geek.com, "ThinkGeek, our sister website, has been selling the 8-Bit Dynami Life Shirt which does the same thing, minus the battery graphic, since 2008. In fact, Etronixmart, who is selling the Love Meter T-Shirt is using the same photo used on ThinkGeek to sell their shirt."

EtronixMart has already pulled down the shirt's web page, probably because someone contacted the site and used words like "copyright infringement" and "lawyers." It just goes to show that if you steal someone's idea and try to sell it on the Web, there's a good chance it'll come back to bite you.