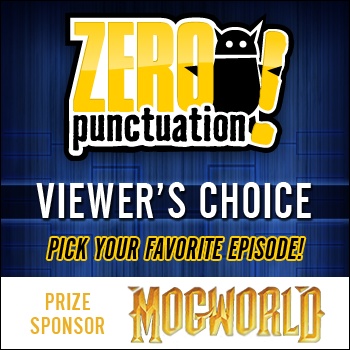 After more than a week of voting and over 100,000 votes, you've finally selected your favorite episode of our popular feature Zero Punctuation. Viewers have been tuning in each week for the last three years to get a taste of Yahtzee's cynical criticism and amusing animations, so picking a favorite wasn't easy. We began with 64 of the most popular episodes, from Age of Conan to Wolfenstein, and then watched as the field narrowed. We were shocked to see massive favorites like Assassin's Creed knocked out in the very first round. Other strong contenders like Super Smash Bros. Brawl and BioShock soon fell victim to the harsh, winner-takes-all brackets.

But in the end, there can only be one. Fittingly, it's for Yahtzee's review of Duke Nukem Forever, a game that has not even been released yet and is best known for its laughably long development cycle. You can check out the full bracket and be sure to let us know through the comments link below whether the democratic process has once again proven its superiority.

Check out the winning episode here!