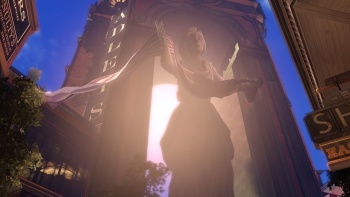 Ken Levine says the BioShock Infinite team won't develop a multiplayer component for the game unless it is "absolutely convinced" that it will live up to the single-player experience.

For all that it brought to the table when it was released in 2007, BioShock was also notable for something it left behind: multiplayer. Online action is a standard feature in just about every FPS to hit the market but BioShock was a purely single-player experience. BioShock 2 managed to shoehorn in some undersea multiplayer shoot-em-up, but Levine, the man behind the original game, says that's no guarantee we'll see it in BioShock Infinite.

"It's not like people won't buy the game if it doesn't have a world-changing multiplayer element. Unless you're Call of Duty, unless you're Halo, unless you've got something new to say like Left 4 Dead, people are not going to care, so why do it?" he asked.

"We're still thinking about it, but unless we're absolutely convinced, it's not something we would do, because I don't see who it serves," he added.

The first BioShock notwithstanding, it would be most unusual to put out a major, mainstream FPS without a multiplayer component, but given how generic it looked in BioShock 2 I'd have to agree there's not much point in sinking the effort into it unless the quality of the experience can be significantly raised. Fortunately, there's still lots of time to make that happen: BioShock Infinite isn't expected to come out until sometime in 2012.