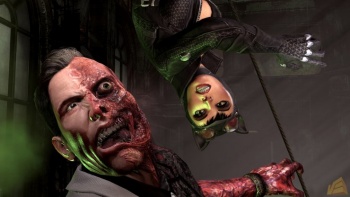 Whether friend, or foe, Batman won't be alone in the follow up to Arkham Asylum.

Batman: Arkham City will feature some kind of multiplayer mode, according to the latest issue of PlayStation 3 magazine PSM3. In a feature on the game, the magazine said, "Multiplayer is a certainty, but no details on this yet."

Co-op play seems the most likely scenario, and Catwoman's prominence in the teaser images, not to mention the absence of Robin or Nightwing, would suggest that she is filling in for Batman's usual sidekicks. There's also images from the game that show Catwoman attacking Two-Face, (pictured above) and her and Batman sharing a tender moment, suggesting that the pair's love/hate relationship is in full swing in Arkham City.

Of course, co-op isn't the only option. The predator challenges from the first game could make for a really fun multiplayer experience, if one person takes the role of Batman - or Catwoman - and the rest are the thugs trying to take him - or her - down. It's a little different than your standard multiplayer, but done right it could be an incredibly tense game of cat and mouse.

It's going to be interesting to see what the multiplayer modes in Arkham City turn out to be, even if we do have to wait until developer Rocksteady is ready to tell us. Batman: Arkham City is scheduled for release next Fall.