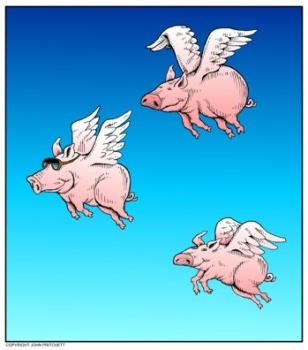 Fire up the rumor mill! 3D Realms co-founder George Broussard may have tweeted a hint that could possibly indicate that Duke Nukem Forever might actually be done!

Could it be? Could it possibly, actually be? Could the legendarily vaporous Duke Nukem Forever finally be complete? Probably not, no, but the most recent tweet from Broussard, one of the creators of Duke Nukem, is nonetheless very intriguing: It's an image of winged pigs.

The significance? Aside from the fact that "when pigs fly" is a common figure of speech for something that's never going to happen, Broussard himself used the term in a 2006 interview with 1Up when he said, "I think it'll be out when pigs fly."

Decade-spanning development period notwithstanding, the Duke has had a rough ride over the last year or so, although things have smoothed out a bit in recent months. In June, an acrimonious lawsuit between 3D Realms parent Apogee and Take-Two Interactive was dropped and last month a rumor that Gearbox was taking over development floated to the surface. Entirely coincidentally, or perhaps not depending on how you feel about conspiracies, Duke Nukem Forever also won the Zero Punctuation Viewer's Choice award earlier this week.

Does it mean anything? Absolutely not! Unless it does, of course. Isn't it exciting? Stay tuned!