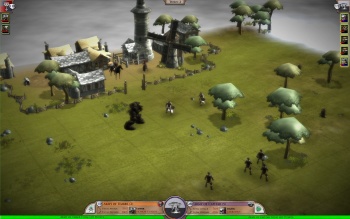 Brad Wardell of Stardock admits that the studio's latest title was released "poorly" and that he's responsible.

Stardock's in-house developed Elemental: War of Magic has been getting bashed by reviewers and also has a mixed reaction amongst fans. Lead designer and Stardock CEO Brad Wardell isn't hiding from the controversy, and has actually come out saying that many complaints about the game are valid and his own fault to boot.

Elemental: War of Magic is meant to be a spiritual successor to 1994's Master of Magic, a fantasy turn-based strategy game that pitted wizards and their armies against each other in a quest for domination. War of Magic follows much of the same path as Master of Magic, but those that have played the game have come up with a list of complaints, saying it's unpolished, over-ambitious, and that it has poor documentation.

One might expect Wardell to blast back at the complaints, but he agrees with them to an extent. A post by Wardell on the Stardock forums makes it seem like the poor reception to Elemental gave Wardell an epiphany about where the development process went wrong.

"I don't think people yet fully realize the completeness of Stardock's fail on Elemental's launch," he wrote. He says there was a "level of disconnect/poor judgment" on Stardock's part in thinking it was ready for release on August 24. "Lack of time wasn't the issue," Wardell admits. "It was blindness, sheer blindness. We felt the game was finished."

Wardell says this wasn't about an early release, but a "poor" release. He places the blame on himself, saying: "Elemental's launch is the result of catastrophic poor judgment on my part ... EVERY competent software developer knows that the programmer must never be the one deciding whether the program is done. Yet, my love of Elemental broke my self discipline and I began coding on the game itself in vast amounts and lost any sense of objectivity on where the game's state was. I normally only program the AI on our games so I can keep a level of distance from the game itself to determine whether it's 'Ready'. On Elemental, I was in love with the world and the game and lost my impartiality."

Wardell plans to talk more about the issue, but for now says Stardock will "do better" in the future. Considering that Master of Magic is one of my most fondly remembered games of the past, I was looking forward to seeing a spiritual remake in Elemental. The widespread negative comments were a downer, but thankfully Stardock plans to fix the game's issues rather than ignore them with September's version 1.1, which Wardell is calling a "substantial" update that might also come with a planned in-game tutorial. Wardell's honesty gives me hope that upcoming versions will actually have the desired positive effect. Everybody makes mistakes, even game developers, but the results of a game developers' mistakes just happen to be seen by the world.