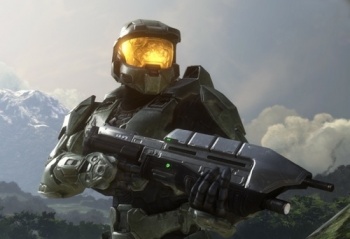 The first attempt to get Master Chief up on the big screen may have failed, but Microsoft says that hasn't soured it against trying again.

The Peter Jackson/Neil Blomkamp Halo team-up fizzled and died over a year ago, and although this made the excellent District 9 possible, it left Halo fans movie-less. This may not always be the case however, as Frank O'Conner, franchise development director for Microsoft's dedicated Halo studio 343 Industries, says that Microsoft is still interested in making a movie out of the series.

According to O'Connor, Microsoft has created a great deal of documentation and resources to support a feature film, as well as developing scripts from Alex Garland, Stuart Beattie, D.B. Weiss and Josh Olson as possible blueprints. O'Connor says that Microsoft has a good idea of the kind of story it wants to tell, but doesn't want to do it just for the sake of doing it. He suggested, however, that it wouldn't just be a straight retelling of the Halo story, and wouldn't require prior knowledge of the games. O'Connor also hinted at the possibility that it might turn to television, rather than movie theaters, as the venue to tell the Halo story.

Considering the scale and popularity of the Halo franchise, it's hard to blame Microsoft for not wanting to rush into making a movie just for the sake of getting something up on the screen. Microsoft retains the film rights, so it has the option of waiting until it has something - be it a script or a director - that it's really confident in.