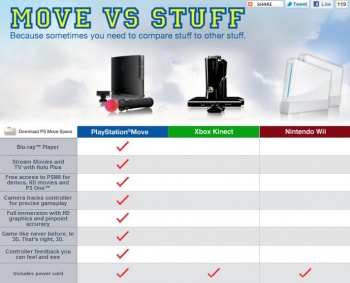 When competition develops complex charts to compare the value of your products, the best way to respond is always with humor.

Microsoft might think that competition to Kinect would be tough to develop and that Kinect's price of $149 is a steal, but Sony has definitive proof that these facts are wrong. With a new selection of websites promoting PlayStation Move, overseen by spokesman Kevin Butler, Sony may have won the propaganda war.

First off, Sony creates a chart of its own called "Move vs. Stuff" that I really can't disagree with. According to the chart, the only similarities between PlayStation Move, the Nintendo Wii, and Microsoft's Kinect are that they all include a power cord, while Move has a ton of other features.

You've also got "Yay Buttons" which explains what "buttons" are and how they work. Though Sony says buttons aren't "save the whales important," it does think they are "not play games that suck, important." Sony presents that gaming without buttons is "craziness" and humorously goes on for quite some time to explain why too.

Another odd aspect of the promotion is the Sensitive Fireman. After putting in a few choices to personalize his message, you can send your girlfriend or grandma a video message from the Sensitive Fireman that will definitely convince her to either buy you PlayStation Move, or to get in on the action when you play.

Microsoft is taking itself pretty seriously with the release of Kinect, while Sony is mocking it at every turn. When it comes to products that are supposed to be fun, I think I prefer Sony's approach.