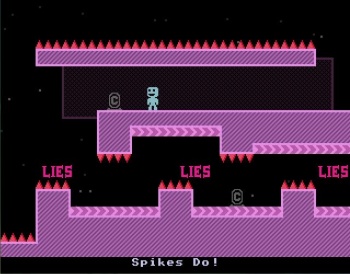 A super fun indie platformer is now available on Steam for just $5.

When Terry Cavanagh's VVVVVV was first released in January 2010, it was a good deal for $15. Now the retro platformer is an absolute steal as Cavanagh has lowered its price to $5 to celebrate it becoming available on Steam.

And it's not just a sale, VVVVVV is permanently available for $5 whether you buy it from the official website or if you grab it off Steam. The ease of buying through Steam made it an easy purchase for me personally, plus you save 10 percent if you buy before September 14. That's only $0.50, but every penny counts nowadays.

Playing the full version, I died well over four hundred times in about an hour-and-a-half, but that's totally okay. The game throws so much variety and challenge at you even though it basically revolves around one simple mechanic of changing your personal gravity from up to down over and over. To collect all of the game's hidden trinkets, you'll definitely sweat as you navigate through spikes, bounce off of small platforms, and avoid strange enemies.

VVVVVV is a great example of one videogame concept explored to perfection. It can get really hard at times, but save points might only be a second or two apart, so death is just another chance to try again. Along with the awesome music and cute little story, I can't imagine not at least trying the free demo to see if your $5 is worth parting with for this gem.