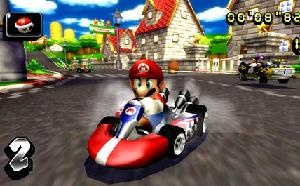 The Wii Games Summer 2010 was started from scratch in a startlingly short amount of time and, on the surface, succeeded in bringing together the wide spectrum of gamers that's made the Wii such a success.

We've seen various attempts at pro gaming and tournament gaming start, stall and thrive over the last dozen years or so. When it came time for Nintendo to play its hand at taking the Wii out to the masses with prizes and unprecedented mainstream popularity at stake, it was apparent that this was going to be unlike any competitive format we'd seen.

To get everybody in one place for a national championship where a ton of prizes can be won by real gamers playing Wii games well, you have to design some competitive system of getting those gamers to standout. Partnering with Six Flags amusement parks and various malls around America gave the tourney organizers the space, foot traffic and casual interest from shoppers and thrill seekers who'd no doubt heard of and seen Wii games and figured "how hard can it be?" and "Holy Bob-ombs, it's free!??!"

It's the structure of the games, the order in which they are played and lastly how they're scored that's impressive about Wii Games Summer 2010. Bowling is always the first game as its various permutations since the Wii launched have been extremely popular. Every flighty teenager, every beer-bellied knuckle-dragger and every smart mouthed hipster can quickly pick up bowling on the Wii and that's important when your Wii Games display is set up between a Cinnamon Bun on a Stick stand and Pricier Image store. The three point shootout minigame in Wii Sports Resort Basketball and Hula Hoop in Wii Fit Plus are nice progressions because they require different skill sets and unique concentration compared to bowling. Mario Kart is just a heck of a lot of fun and always has been because of the rich yet intuitive weapon systems and fun-spirited competition. The cooperative demands of collecting coins with your partner in New Super Mario Bros is a total departure from everything competitors had been doing up to that point.

But how do you fairly score individual games in a way that represents the player's overall gaming skill? Running through the entire gauntlet of five games, a good team would score roughly 21,000 points when all was said and done. The quick math tells us that's a little more than 4000 per game. How do you get 4000 points out of Basketball where you're shooting a finite number of basketballs versus Mario Kart where you're racing in a time trial? You work it out so that there's a baseline number of points available in a game and simply acknowledge that some games are going to offer more opportunities for bonus point than others. Finishing with more time on the clock in Mario Kart should yield more points than somebody who finishes with less, so you let those bonus points count for your total tournament score. This system takes into account the typical Wii gamer, even those as competitive and elite as the Wii Games Summer 2010 competitors, who may put more focus on his Mario Kart practice rounds trying to squeeze out bonus points unavailable in say New Super Mario Bros. ... or not.

Unlike say Major League Gaming or Madden Challenge, the competitors at the first Wii Games Summer 2010 seem to be less concerned about playing within the rules and more concerned about simply playing. Just the way Nintendo likes it.