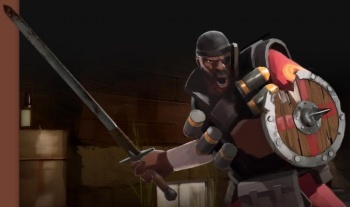 Gabe Newell of Valve says the studio mistakenly expected it would have more opportunities to update the Xbox 360 version of Team Fortress 2 after it was released because the rules for Xbox Live were "such a train wreck" that they'd have to be changed eventually.

How you feel about Team Fortress 2 depends a lot of on your platform of choice. Owners of the PC version, wallowing in the mountainous piles of free stuff Valve has put out over the years, are generally pretty satisfied with their bang for the buck, while 360 players are more likely to feel a little bit hosed over being more or less abandoned. But speaking to PC Gamer, Newell, along with Erik Johnson and Doug Lombardi, said it's not entirely Valve's fault; the company knew Microsoft had strict rules about how games could be updated over Xbox Live but assumed that things would eventually change because it's such an obviously flawed system.

"We thought that there would be something that would emerge, because we figured it was sort of untenable," Newell explained. "'Oh yeah, we understand that these are the rules now, but it's such a train wreck that something will have to change'."

"The lack of updates on the 360 for TF2 is... a total failure," Johnson said. It's particularly troubling for Valve, he added, "Because it got all the way through to customers. It's like a bug. If you fix a bug before it ever ships, it's pretty cheap. If you ship it and then fix it, it's really expensive. Those ones are really bad."

Somewhat ironically, Newell also praised the PlayStation 3, which not too terribly long ago he treated like something stuck to the bottom of his shoe, for picking up the ball Microsoft dropped. "We're really happy with the current situation with the PS3," he said. "We're solving it now in a way that is going to work for our customers, rather than assuming something is going to emerge later that will allow us to fix this."

My, how things change, eh?